The Importance Of Good Hay Tarps 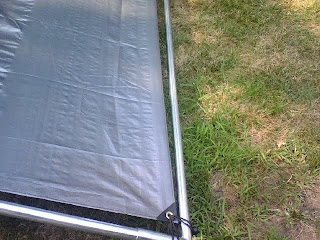 A recent Free Press Release (June, 2010) relating to alternative storage options speaks very favorably regarding effective hay storage with hay tarps. Especially interesting is the tarp which has three layers, with the inner layer being an impenetrable membrane and the outer layers being coated with waterproof material. The silver of the outer layer diverts the sun's rays, reducing humidity and heat.

The release states further of the importance of this alternate storage space to be used in place of barns and other such buildings. This frees these other buildings for other uses by the grower as well as assuring that the hay under the tarp is safe for any kind of weather. Having hay tarps secure is essential if one is to keep the bales in good condition for use or for sale. Such things as the correct bungee cords, steel ground stakes, tarp tape, clamps and many others are crucial if the tarps are to stay in place with bad weather

Anyone involved in raising hay can tell of the many hours of hard work that are involved. It is not just plowing the ground but planting the seed, making sure the fertilizer is just right and being sure it is properly watered. In addition on sometimes has the problem of insect or blight, which requires special chemicals. Once hay is grown and harvested it is important that it be protected from the weather with hay tarps.

After harvesting, hay must be properly cured to avoid it forming mold and becoming unusable. Choosing the correct tarp is very important if one is to protect their hay until it can be sold or used. Some tarps do not hold up in bad weather and start leaking which is disastrous and can cause the grower to lose most of the crop.

A good tarp is made of very heavy-duty material, coated with a water resistant poly material and reinforced with double stitching on all sides. An inspection of the eyelets and rope used, as well as how the tarp fits over the hay, is very important. If the proper tarp is selected one does not have to be concerned with rain, snow, wind, sun or any other type of weather affecting the its condition.

How one stores their hay depends on whether it is for personal use or to be sold. Hay usually sells much better in the off-season so many farmers put the hay under tarps immediately after it is cured and then sells it at a later date. When this is the case, having the correct tarp is essential to keeping it in good condition until the sale.