The Tarps Plus Challenge

It’s called “The Tarps Plus Challenge,” an outrageous web series pitting people against tarps in a no-win situation.
Celebrating sport and outrageous silliness; welcome to The Tarps Plus Challenge. The weekly video series features athletes, actors, magicians, and regular people in outrageous scenarios with tarps. Each week a fictional participant is presented with a challenge that demonstrates how significant the tarps from Tarps Plus are.
The spokesman Billy Mac who carries a close resemblance to the actor/filmmaker and owner of Tarps Plus Michael Stein, introduces the subjects in each video. In most cases, the subject fails at defeating the tarp in one-way shape or form.
According to a study conducted by Tarps Plus, most people that use tarps are outdoor and adventure driven. Tarps Plus wants to celebrate the average everyman and everywoman who is looking for adventure.  The company is small but large for a tarp supplier and is the leading online tarps presence in the USA.

The advertising budget for the web video series is next to nothing. It doesn’t hurt that the owner of Tarps Plus (Abadak Inc.), Michael Stein, is also an actor, writer, director, and producer.  Stein, along with his thirteen-year-old daughter, write, produce, act, shoot, and edit each episode. They have shot twenty episodes and will be shooting thirty more for the remaining episodes of 2020.
A new video is rolled out every Wednesday at 10:30 am CST. The videos are approximately two minutes in length, except for the occasional “How To” themed (how to use a tarp for different applications), which are approximately 8 minutes.  The videos are featured on the company’s website and social channels.

Watch episode 1 of the “Tarps Plus Challenge” here: 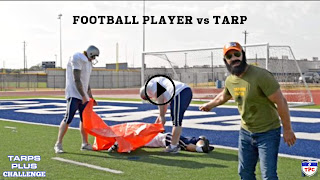