A personal post about tarps and American history: my wife and I watched the show "Outlander," which takes place in the 1700s, and I noticed canvas tarps or possibly hemp tarps being used for shelter in some scenes of the show. Being a tarp expert, I did some research on how tarps were used back in the 1700s.  Poly tarps were invented in the late 1950s so here are some facts about tarps before that that many people might not know.
Fact #1: When ships sailed across the Atlantic ocean, the sail would often be worn and not suitable for further travel.  The sail was used for tent material or coverings merchandise for trade.
Fact #2: Hemp was used for tarp cover material. Cotton is soft and was valued more for clothing while hemp was used for rope and industrial type covings.
Interesting Facts #3 Wax was used to seal hemp material on the tarp enabling it to catch water and was used as a device to catch water while on the go or when a barrel was not available.
Interesting Fact #4 Many times, hemp or canvas tarp were used to dump a deceased personas body overboard a ship if they had died. During the 1700s, Small Pox was an epidemic. When someone died on a long journey, the body was respectfully wrapped in a tarp, given a prayer, and gently slipt into the sea; this was essential due to the spread of the virus and the lack of space for diseased bodies. 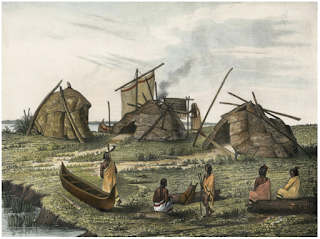 The picture above shows a ship next to a tent village. Chances are that sail might have been given in trade.  A new sail stored in the boat would be hoisted up and used as they departed.
Michael Stein is a writer as well as the founder and CEO of Tarps Plus.  For more information, go to www.tarpsplus.com
Labels: canvas tarps hemp tarps poly tarps tarp tarp canopies tarps Tarps Plus tarpsplus